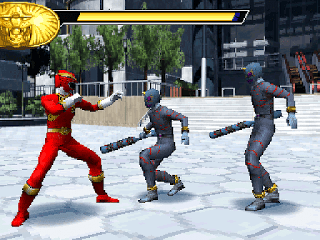 Genre: Action
Perspective: Side view
Gameplay: Beat 'em up, Fighting
Published by: Bandai
Developed by: Natsume
Released: 2001
Platform: PlayStation (PSX, PS1)
A thousand years ago, there was a war between humans and the demon race of the Org. With the help of the Power Animals, the ancient Gao Warriors managed to defeat the Org leader, Hyakkimaru, and sealed them off.
Today, the Orgs have begun to revive, and the Power Animals choose five warriors, who must abandon their daily lives and give up their names to become the next generation of Gaoranger to protect life on Earth.
‹
›
Home
View web version