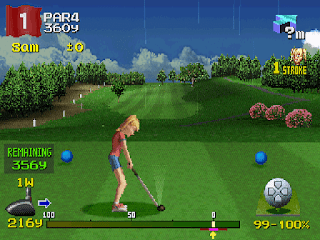 Genre: Sports
Perspective: 3rd-person
Sport: Golf
Published by: Sony Computer Entertainment America Inc.
Developed by: Clap Hanz Ltd.
Released: 2000
Platform: PlayStation (PSX, PS1)
Sports games and imitation of golf have always had only their own circle of fans, because this sport, unlike football, is not so accessible to a wide range of people being a sport for wealthy people. Over the years, golf imitations for PCs or game consoles have not undergone any significant changes since the Leaderboard, except for the appearance of the game, that is, graphics, there were no breakthroughs as such, but it had to and did happen. The game Hot Shots Golf 2 really stands out among other golf simulators (and this is already in its name), namely, the fact that it is available to almost everyone. Joining a club, flourishing and withering, flying over a hole - all these and many other things can be done with a single press of a button. You don't have to travel endlessly through numerous menu screens or call up tiny maps.
In addition to the regular Tournament and Multiplayer modes, which are for four players, there is also a reward for a Smash Court Tennis style that can be achieved in a single player game. Here you will meet exceptional characters to play with, new courses to play with, even different types of clubs and balls. There are originally 13 golfers here, and you can see their own mark on their heads. As you play, you will no doubt discover one or two secrets, for example, muscular characters can hit the ball harder. Therefore, when you choose a club in which you intend to try your luck, no one will tell you the rank of the club as such; you will only find out the rank of the club to which this particular opponent belongs. There are six full courts in total from which you can choose, although at the beginning of the game you will only have two of them available. The environment graphics are quite impressive, especially if you use the manual flight observation option. However, the extremely simple nature of the script may disappoint you, but don't give up on the game right away. If you disdain any of these holes, you will soon find that each is as difficult to access as those found in the Tiger Woods Golf Course (EA Sports' flagship series).
‹
›
Home
View web version