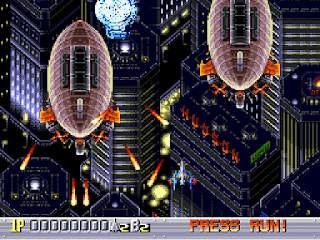 Genre: Action
Perspective: Top-down
Art: Anime / manga
Gameplay: Arcade, Shooter
Setting: Sci-fi / futuristic
Published by: Hudson Soft Company
Developed by: CAProduction co.
Released: 1995
Platform: TurboGrafx-CD (PC Engine)
The main characters are four female pilots from the police of the future, their group is called by the way Burning Rabbits (Burning Rabbits). Their duty is to search for bandits, exploring the distant corners of the Galaxy. And sometimes you have to change the time space. But in the future it is easy to do. The real danger is criminals using time machines!
4 flying ships are available for you, each with its own unique characteristics. There are only three types of weapons. During the game, small companions can help if you have time to take the bonus. You can play together with a friend in the cooperative passage mode.
Ginga Fukei Densetsu Sapphire is one of the most graphically sophisticated PC Engine CD games and also one of the most popular. Don't believe me? Try it yourself!
In 2008, this game was ported to the PSP as part of the Ginga Ojousama Densetsu Collection (in the west of the Galaxy Fraulein Collection) along with games like Galaxy Fraulein Yuna and Galaxy Fraulein Yuna 2. Sapphire seems to be out of that collection for obvious reasons, but these the game has one thing in common - the creator of the characters Mika Akitaka.
‹
›
Home
View web version