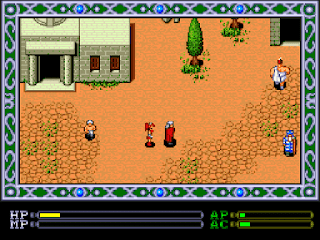 Genre: Action, Role-Playing (RPG)
Perspective: Side view, Top-down
Visual: 2D scrolling
Art: Anime / manga
Gameplay: Platform
Setting: Fantasy
Published by: Working Designs
Developed by: Renovation Game
Released: 1992
Platform: TurboGrafx-CD (PC Engine)
Your hero, Sadler, doesn't seem like an exile. On the contrary, he gathers a team for himself in the city. And you would travel well together if someone did not disturb the peace of your beloved country. Some forces of the Luciel Empire launched an attack on Dune Village ..
This game is an Action / RPG hybrid, in the style of Wanderers from Ys. Fight in 2D with a side view, and travel the world in 2D with a top view. As in other RPGs, in cities you can stock up on food, weapons, magic.
Unlike the Japanese version, the names and titles are slightly changed here, in the American version they give less gold. But the censorship left bloody corpses, as well as some names of a narcotic nature (cocaine and hashish).
‹
›
Home
View web version