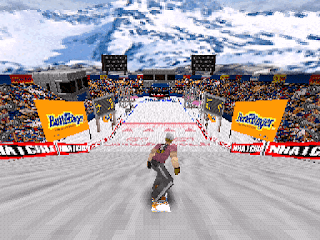 Genre: Sports
Perspective: 1st-person, 3rd-person
Sport: Snowboarding / skiing
Published by: Sony Computer Entertainment America Inc.
Developed by: UEP Systems Inc.
Released: 1997
Platform: PlayStation (PSX, PS1)
The first release of the game was a notable phenomenon in the gaming world, although it drew a number of criticisms. Therefore, amateurs were looking forward to the continuation with impatience and curiosity. Instead of five mediocre slopes, there are 16 difficult slopes and a lot of different equipment for the descent (boards). You can also make your own board according to the required weight, color, speed and design! Such a variety of possibilities, as it were, requires the widest repertoire of tricks, and it's done! In addition to those included in the first game, there are 40 more new aerobatics here. Instead of the previous two characters, 10 are already involved in the game. And each is good in its own way!
‹
›
Home
View web version