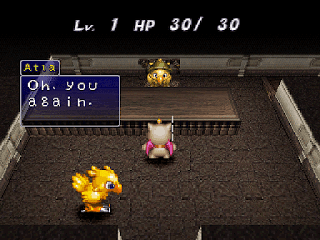 Genre: Role-Playing (RPG)
Perspective: 3rd-person
Published by: Square Co.
Developed by: Square Co.
Released: 1997
Platform: PlayStation (PSX, PS1)
The first game in the Final Fantasy universe that follows the adventures of the Chocobo. In the role of this cute feathered creature, you have to wander through randomly generated dungeons.
At the very beginning of the game, we are shown an introductory video in which one of the Chocobos turns into evil after finding some kind of crystal in the yard. After that, the evil comrade throws the main character into the dungeon and your adventure begins. Throughout the game, you will roam the ever-changing dungeons, collect items and weapons in order to become stronger and survive surrounded by constantly growing enemies.
‹
›
Home
View web version