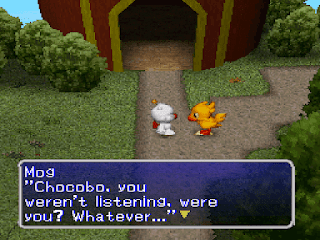 Genre: Role-Playing (RPG)
Perspective: Bird's-eye view
Pacing: Turn-based
Interface: Direct control
Setting: Fantasy
Published by: Square Electronic Arts L.L.C.
Developed by: Square Co.
Released: 1999
Platform: PlayStation (PSX, PS1)
After adventuring in the first game, Chocobo Dungeon, Chocobo and Mog continue to search for treasure. One day, Mog discovers a new Mysterious Dungeon and takes the treasures from within. This releases the seal that causes Bahamut to appear when the dungeon plunges into the ocean. Chocobo is rescued by a young white mage, Shiroma, the only person living in the monster village. Chocobo must help. I can find Bahamut and fix everything that was unsealed in the Mysterious Dungeon.
Chocobo's Dungeon 2 is an RPG in the style of other games in the Mysterious Dungeon series. Chocobo must go down into the dungeons alone or with a partner (controlled by artificial intelligence or a second player), collecting treasures, finding a passage to the next floor and satisfying hunger. The game is viewed from top to bottom as all objects on the screen move at the same time. Chocobo can use one weapon and armor, while hunger is satisfied by eating different types of nuts. Spells can be collected, and subsequent casting increases the skill of this spell. Unlike other Mysterious Dungeon games, Chocobo retains his level and stats between trips to the dungeon. Boss monsters await most of the tasks. The inhabitants of Monsters Town have various additional tasks available.
‹
›
Home
View web version