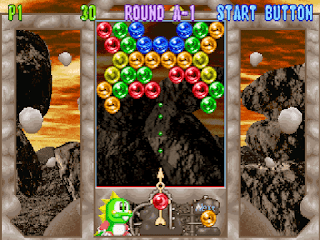 Genre: Puzzle
Perspective: Side view
Visual: Fixed / flip-screen
Art: Anime / manga
Pacing: Real-time
Gameplay: Tile matching puzzle
Published by: Natsume
Developed by: Taito Corporation
Released: 1998
Platform: PlayStation (PSX, PS1)
Bust-A-Move 4 (Puzzle Bobble 4) is a popular game in which you have to clear the screen of balls by throwing balls of the same color into them (according to the tetris principle). In the fourth part there is a mode of a regular game, a campaign and a two-player game with a choice of eight characters. There are several new characters (there are also hidden ones), as well as a Story mode, where players will receive tarot cards for completing each level. Player Vs CPU mode is presented in two versions: Story Mode (develops as you defeat each of the characters under the control of AI, and changes depending on the character chosen at the beginning) and Win Contest (a simple mode in which you need to win as many victories in a row). In addition, you have the opportunity to create your own level.
‹
›
Home
View web version