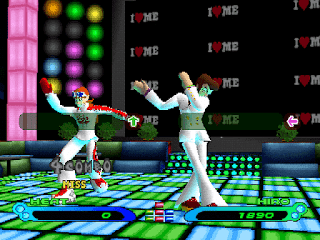 Genre: Action
Perspective: 3rd-person
Pacing: Real-time
Gameplay: Arcade, Music / rhythm
Published by: Enix America Inc.
Developed by: Metro Corporation
Released: 200o
Platform: PlayStation (PSX, PS1)
Unlike its predecessor, Bust a Groove 2 makes use of all four figure buttons on the PlayStation (depending on the level of play). The bar for score was also changed. Both opportunities to jam are maintained, this time using R1 and R2 with the opportunity to also reverse your opponent's attack, although the "groovin '" mode was changed (which makes a change to the default setting). Another change that emerged is the possibility of stealing the opponent's dance "solo" times and being able to use them in favor of the attacking player, when in the previous version, it was limited to the opponent failing those steps.
The player can see how His Character Falls when 2 or more combinations fail, resulting in Negative Combos that, although they do not subtract or increase points, can hinder the rate of advancement of the score of the same
If the player finishes the song with few errors or has performed one or more "Freezes" then they will end up with a solo demo called Fever time.
When playing in "Single Player" mode, a series of white dots appear. Depending on how good the player is, he can go up in points. The final point on the right corresponds to Robo-Z Gold, who usually only appears in this position. Upon reaching the top, if the player is good enough, a dotted line appears coming out of the Robo-Z Gold point and going up. The latter corresponds to Pander.
The Practice Mode is much more flexible when choosing the setting when in the previous version it was limited only to that of the selected character, as well as the selection of the character's alternate clothing, which is selected with a triangle or circle depending on the version.