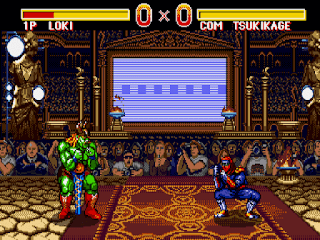 Genre: Action
Perspective: Side view
Visual: 2D scrolling
Gameplay: Fighting, Martial Arts
Published by: Good Deal Games
Developed by: Sega
Released: 1994 / 2006
Platform: SEGA CD / Mega-CD
Burning Fists: Force Striker is one of those previously unreleased games for the Sega Mega CD that was revived a few years later. The game was supposed to be released in 1994, but the game did not go beyond the Beta version. This Beta version, approximately 80% complete, was later acquired by Good Deal Games and finalized by them for limited edition sales. The game is a fighting game similar to Street Fighter. The game has eight characters from different parts of the world: Loki, Masamune, Empusa, Mictlan, Tsukikage, Shi San Mei, G. Gotchev, Vincent. Each of the characters has its own sets of techniques and super hits. Also, each of the characters has its own arena (country). The graphics in the game are good, about the same as in Eternal Champions. There is practically no plot in the game, the final boss was also not completed. This is another game that has not yet been officially released, which was given a second life.
‹
›
Home
View web version