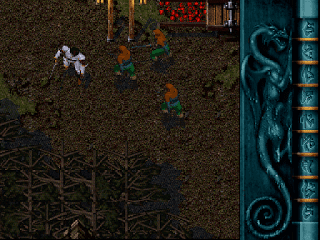 If the control keys stop responding - switch "Pad 1 Type" to Standard and then to Default.
Genre: Action
Perspective: Bird's-eye view
Gameplay: Puzzle elements
Setting: Fantasy
Narrative: Horror
Published by: Crystal Dynamics
Developed by: Silicon Knights
Released: 1996
Platform: PlayStation (PSX, PS1)
Blood Omen: Legacy Of Kain is a horror game designed to satisfy the tastes of the most avid thrill-seekers. As the game progresses, you control Kain - an unsympathetic vampire, thirsty for blood and perfectly able to drink it! It is unlikely that this game is worth giving to children, and it is just that the faint of heart should not take it. The features of the game are expressed in a special graphic performance, saturated with cruel and bloody scenes, and in accompanying video plots, which take your breath away, and in a superbly selected sound and musical accompaniment.
The game takes place in a medieval fantasy world. The storyline is quite intricate and requires attention and perseverance from you. You have to exorcise the monstrous demon hunting for your soul with the help of spells, skillful sword work and other methods of bloodshed (as well as blood drinking).
We can say that to fight various enemies, you use a fairly simple control system, which is based on a fairly simple scheme: dash forward - blow - retreat back. As the game progresses, you can equip 34 types of weapons (including various spells), as well as transform from humans into outlandish creatures; Wolf, Ghost (Mist) and Bat - each time, acquiring new abilities.
Overall, Blood Omen: Legacy Of Kain is definitely an above average game.
‹
›
Home
View web version