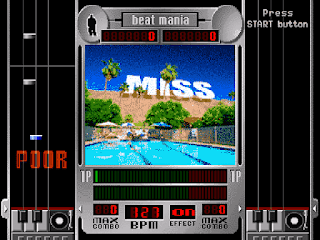 Genre: Action
Perspective: Arcade, Music / rhythm
Published by: Konami of Europe GmbH
Developed by: Konami Computer Entertainment Japan
Released: 2000
Platform: PlayStation (PSX, PS1)
The player has a platform which consists of five buttons and a rotating disk. After selecting a song, two fixed note tracks made up of four rows are displayed on the screen, both aligned one to the left and one to the right. In the middle you can see the animation of the previously selected song, which is usually always different with respect to each sequel.
Within each track, a series of notes in the form of stripes (-), fall from the top of the screen towards a red marker at the bottom of the screen, 4 which each time a note is overlapped Above the marker, the player must press the corresponding key (white keys for white notes and black keys for blue notes), and as for the puck (red notes), it must be turned to the side. If the notes come in a row, it should be turned from one side to the other. By playing the notes properly, you will gradually increase the GROOVE GAUGE located at the bottom.
Because beatmania does not support time stops, all songs that come from another game that did have it are compensated with changes in speed.
After finishing a song, the results table then appears, showing the amount of score, the performance levels classified in P-Greats (Perfect Greats, Just Greats or Resplendent Greats), Greats, Goods, Bads and Poors and two Line graphs (one for each player) that serve to measure the precision of each player, which is generated from the energy bar. To win a stage or stage, it is necessary that the energy bar is at least 80%, marked in red. If the player does not succeed, they will end up failing the song and the set will be considered over.
‹
›
Home
View web version