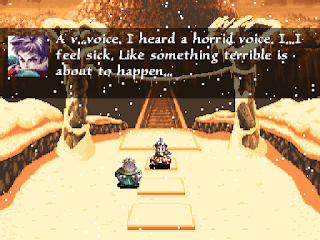 Genre: Role-Playing (RPG), Strategy / tactics
Perspective: Top-down
Art: Anime / manga
Pacing: Turn-based
Setting: Fantasy
Published by: Sony Computer Entertainment Inc.
Developed by: G-Craft
Released: 1995
Platform: PlayStation (PSX, PS1)
A girl named Kukuru lives in a village at the foot of a mountain with a Sacred Flame in which an ancient Spirit is sealed and guarded by the Sacred Tribe. Kukuru must marry a wealthy man whom she, of course, does not love, and in order to avoid this marriage, agrees to carry out a strange assignment from the mayor of the village and extinguish the Flame, which the girl does. As a result of this rash action, the Spirit awakens and, of course, first of all, threatens to destroy everything. The young adventurer Arc arrives at the ill-fated village just at the moment when the Flame is extinguished, and the distraught Kukuru is staring in fright at the evil Spirit. Arc recognizes in the Spirit the killer of his father, but before the young man could do anything, the Spirit disappears. Arc, Kukuru and their friends have to correct a stupid mistake, stop the Spirit and avenge the death of Arc's father. This action will unfold in the classic style of a Japanese tactical RPG with a turn-based combat system.
‹
›
Home
View web version