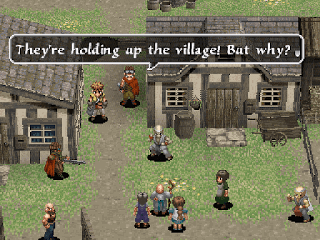 Before swap CD, save state to file, next CD, upload save state file.
Genre: Role-Playing (RPG)
Perspective: Top-down
Art: Anime / manga
Pacing: Turn-based
Setting: Fantasy
Published by: Sony Computer Entertainment Inc.
Developed by: G-Craft
Released: 1999
Platform: PlayStation (PSX, PS1)
The events of the third part of the series take place several years after Elk and Arc clashed with their final enemy from Arc the Lad II. The third part of the RPG game is not far from its predecessors - you also fight enemies in turn-based battles, upgrade your weapons with the help of special materials, use spells. You play as Alec, a resident of a village that suffered a disaster called the "The Great Disaste" many years ago. Alec was saved by a mysterious hunter, who took the teenager to his place, where he grew up. Alec dreams of finding his savior and, like him, becoming a great hunter. Together with his best friend Lutz, he tests himself in nearby settlements on small errands and once fate brings two friends together with a mysterious organization called the Academy. This is where the adventures of our heroes begin.
‹
›
Home
View web version