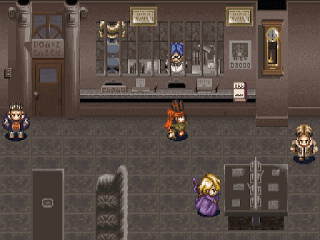 Genre: Role-Playing (RPG)
Perspective: Top-down
Art: Anime / manga
Pacing: Turn-based
Setting: Fantasy
Published by: Sony Computer Entertainment Inc.
Developed by: G-Craft
Released: 1996
Platform: PlayStation (PSX, PS1)
The second part is no longer tactics, but a standard role-playing game with a tactical combat system and all the accompanying ones. Now you can independently move around the world, explore cities and dungeons, go shopping, finally ...
If earlier the world, revealed by some snatches of plot scenes, gravitated more towards the fantasy component, now, having given the player more freedom, the authors have decided how the Arc the Lad universe should look like. And now, before us is a modern (but not climbing into the distant future) world with an admixture of fantasy. Cities are not represented entirely by wooden houses or medieval castles, but are standard stone apartment buildings that can be easily seen from the window of your house (unless you yourself live in a hut or a castle ...). Wrecked cars are parked on the streets, and news is broadcast on television and radio. But, despite the clear progress, the advanced achievements of science and technology get along with magic and monsters, and edged weapons remain in demand no less than firearms. While neon signs and homeless people warming themselves by a dying waste barrel coexist with ancient temples and dragons ...
Now for the specifics. In general, take what was in AtL1 and multiply by 5. The game has become much larger. 60 hours to complete, instead of a pitiful 12, a huge number of controlled Persians, to replace the old 7. The lack of weapons in the previous part was generally fixed in Napoleonic style - now there is a blockage here, and everyone gets experience and gains a level (!!!), and the hero can use one of several types of killer devices. There is also a special shop that makes one powerful weapon from different weapons, and even with all sorts of status properties. And there are so many status changes that they are dazzling in the eyes. Even more sub-quests have been added to the game - the hunter's guild in each city offers money-hungry hunters a set of optional tasks that allow them to simultaneously pump and earn.
The combat system itself has not undergone significant changes. This is still a tactic where you are free to choose five characters from among the available ones for battles. There are much more possible combat units - there is magic that allows you to lure monsters into your squad. There are many monsters, they also gain level, evolve and use a certain type of weapon. A well-trained pack of these creatures is quite capable of replacing the units assigned to the plot.
The attention to detail is extremely pleasing. With a set of coolness, the heroes, instead of one blow, immediately inflict a series of cuffs, you can wander around the area with any (currently available) character, which affects in certain places on the receipt of various bonuses, each monster dies in its own way: mummies hide in coffins, wolves turn into screeching puppies ... And every continent (there are 12 of them here) was not too lazy to draw a beautiful map. And even if there are no more than a couple of cities, the illusion of scale is created ideally!
‹
›
Home
View web version