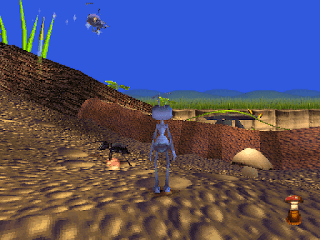 If the Start button does not work on the title screen - switch "Pad 1 Type" to Analog.
Genre: Action
Perspective: Behind view
Gameplay: Platform
Setting: Fantasy
Published by: Take-Two Interactive Software
Developed by: Traveller's Tales (UK) Ltd.
Released: 1998
Platforms: PlayStation (PSX, PS1), Nintendo 64 (N64)
In this action-platformer, you control an inquisitive ant named Flik. This inventor, quite by accident and without any ulterior motive, put the entire anthill on the brink of death. He wanted his method to help his comrades quickly prepare food, and he himself only destroyed what had already been collected and prepared! But this is not the worst thing - the problem is that everything prepared was a kind of tribute to the gluttonous grasshoppers who terrorized the poor ants and they are already on their way to Ant Island! And a new idea is born in the head of a smart ant how to get rid of this misfortune - he goes on a long journey for mighty (supposedly!) Warriors - insects in order to get rid of grasshoppers - parasites.
The game is a game, and it cannot fully convey the plot moves of the animated film, nevertheless, Flick has to go through five worlds, each of which has three levels. He solves simple puzzles, jumps from platform to platform, throws berries at grasshoppers, mosquitoes, bedbugs - stinkers and other vermin. He will also have to fight with giant bosses, such as a huge bird or the Leader of Grasshoppers.
The controls of the game seem a little odd at first and not always responsive, but with practice, and the game is on fire, you will stop noticing it. The graphics of the game are great. She is really very beautiful and pleases the eye with bright and clear colors, luxurious greenery, and a full 3D perspective. It's a pity that the camera is very obstinate and everything strives to adapt to your actions, as a result you constantly lose your bearings and sometimes it is annoying.
‹
›
Home
View web version