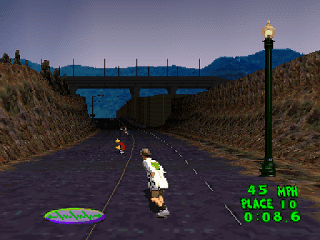 Genre: Racing / driving, Sports
Perspective: Behind view
Gameplay: Tricks / stunts
Sport: Skateboarding, Snowboarding / skiing
Vehicular: Bike / Bicycling
Published by: Sony Computer Entertainment of America
Developed by: Sony Interactive Studios America
Released: 1996
Platform: PlayStation (PSX, PS1)
2Xtreme is the second edition of extreme racing games where you will be offered a ride, performing tricks and beating rivals on roller skates, snowboards, skateboards and mountain bikes. The choice of the type and method of riding determines the track on which this action will take place. The game has been redesigned compared to the first part of the game - new tricks, characters, tracks and awards, now to access new tracks you still need to earn a certain number of points (performing tricks). The game has over 12 tracks in different countries and cities, for example, Las Vegas (USA), Africa and Japan. You can start with the training mode or immediately start in the season (while you have 4 levels of difficulty setting according to your abilities), if this is not enough for you, then you can compete with a friend on a split screen.
‹
›
Home
View web version