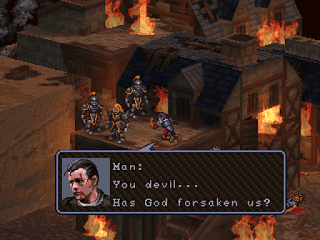 Switch to Enable "PE2 / VH1-2 Fix" and restart emulator.
Genre: Role-Playing (RPG), Strategy / tactics
Visual: Isometric
Pacing: Turn-based
Gameplay: Tactical RPG
Setting: Fantasy
Published by: Konami of America
Developed by: Konami Computer Entertainment Tokyo Co.
Released: 1999
Platform: PlayStation (PSX, PS1)
It all starts in a small and distant village, in a far and unknown land. A certain stranger appears in it in search of a good bath. He really stinks a lot. The Blood Knights are hunting him, a rather gloomy company, they sit on his tail and at all costs want to catch him before he reaches his goal - the throne! Due to a terrible conspiracy, this now impoverished rogue was thrown from the throne by the cunning Queen Agatha, who claimed the throne as hers. Now, sheltered by four street boys in a tree, he, this stranger of ours, inspires the population to revolt against the nobility and exhorts them to fight for freedom. And then suddenly disappears with three pieces of royal skin, a bottle of Lynx gel and a rubber duck ... Some time passed, and the children, inspired by the stories of a stranger, were outlawed. Due to the incomprehensible vicissitudes of fate, this gang dreams of overthrowing the reigning monarch, stopping at nothing, not even the shedding of blood.
Despite such a famously twisted plot, the game itself Vandal Hearts 2 is mainly concerned with the battle. Most of the story passes before your eyes in the form of text, which is told by the main characters. It may seem a little tedious, but the moment the battle begins, you realize that everything was not easy. During the game itself, you realize that it is not at all like a simple RPG, but rather like chess - only with a lot more blood!
Finally, the battle began. You choose the disposition for your troops, and then it all depends on your ability to properly use the benefits of different types of weapons and positions, which can bring you victory. You must study the landscape before the battle in order to take commanding heights, use flying projectiles if there is a lot of water in the area and learn to use at least a little conservation magic. When you buy weapons from various shops along the way, you will notice that many weapons use spells. They can be activated if you get some kind of magic points during the battle, and the effect of such weapons is incredibly destructive. They can heal and destroy, and the process of collecting them is quite interesting in itself.
This game does not differ much from the previous version, the same models of drawing the ground are used, the combat system and the magic system still play a leading role here, but some not very significant changes have occurred. The harsh and tough interface of the previous version has been slightly softened, the number of weapons available to you has been increased, and you can give your warriors two types of weapons at once, which is sometimes absolutely necessary. Those who occasionally want to take a break from the turn-based development of events will find short breaks in this game. Those expecting new "advance attacks" instead of standard counter-attacks will find it in this game. A lot of attention should be paid to the formation of your team, and if you hang heavy weapons on a physically not very strong warrior, then you will clearly not be good. Only the correct calculation of all your actions can guarantee you that you will progress slowly but surely. See for yourself, and you will think hard about how to defeat your next opponent. One of the most terrifying spells in this game is Requiem. If you use it against any of your opponents, then the souls of the dead soldiers appear on the battlefield and curse your victim. Three gruesome figures scurry across the screen, and eventually the unfortunate victim falls dead.
Same old story: Several queens in long robes? Not exactly, because the storyline has undergone significant changes compared to the previous version, and they are too good with a sword for anyone to dare say that about them. Here is the theme of Ash Lambert, and all his attempts to free the earth from evil. During his mission, when he wanted to plant the king's head on the edge of his sword, he figured out the magical nature of magical items, which allowed him to become a magical Vandalier.
Aside from the plot itself, the game is very similar to the original version. The addition of mystical elements made the magic system more balanced. It's old and new at the same time, so see for yourself.
‹
›
Home
View web version