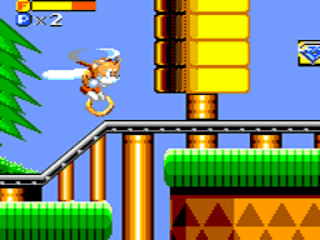 Genre: Action
Perspective: Side view
Visual: 2D scrolling
Art: Anime / manga
Gameplay: Platform
Published by: SEGA Enterprises Ltd.
Developed by: JSH Co., SIMS Co.
Released: 1995
Platform: SEGA Game Gear
The game is an offshoot of the Sonic the Hedgehog series, the main character is Tails the fox, not Sonic the hedgehog. In the story, a witch named Witchkart captures the island and declares herself its mistress, and she is going to turn all those she dislikes into magic crystals. Tails, seeing this, decides to save the island. In Tails' Skypatrol, the player controls Tails, and must control him during the flight, avoiding obstacles, collecting items in the levels and destroying enemies.
Tails' Skypatrol was the second game in the series to feature the fox Tails as the main character rather than the main character in the Sonic franchise, and was developed as an offshoot of the main series of games. The project received mixed reviews from the gaming press. Of the merits of the game, critics name the gameplay, but of the shortcomings, they note the graphics and control.

Tails 'Skypatrol is a shoot' em up game in which the player controls the fox Tails while flying. According to the plot of the game, an evil witch named Witchcart captures the island where the main character has arrived, and declares herself its mistress, and is going to turn everyone who dislikes her into crystals. Tails is about to stop Witchcart and save the island.
The player controls Tails, which is constantly in flight, and the levels are executed with side-scrolling scrolling, thereby the fox flies forward along a predetermined path. In total, you need to complete five game levels (Training Area, Rail Canyon, Ruin Wood, Metal Island and Dark Castle). At the end of each level, except for "Training Area", the character must defeat the henchman bosses of Witchkart (Fockewulf, Bearenger and Carrotia), and at the last level, Witchkart herself must be defeated. The player needs to avoid hitting the ground and other obstacles, otherwise life is lost. Also, life is lost if Tails runs out of energy, the indicator of which is indicated in the upper left corner. Energy can be replenished by collecting candies on the levels, which can be from one to three pieces at a time. If the player earns 10 and 30 thousand points in the game, he gets an extra life.
Throughout the game, Tails holds a ring in his hand, thanks to which he can interact with objects such as weights, minecarts, balloons and others. With this ring, you can also break through walls and destroy enemies. If the player hits the enemy or is attacked, then the fox will lose height, and you need to quickly press the buttons so as not to lose life. The ring can also be used to hit the bells scattered around the level. If you do this, the player will continue from where this bell is located, and not start the level again. The levels may contain various bonus items that give the player additional points and other opportunities.
‹
›
Home
View web version