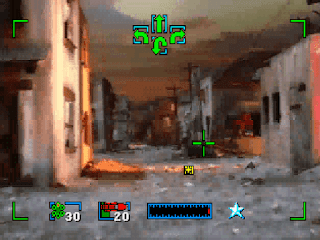 Genre: Action
Perspective: 1st-person
Art: Video backdrop
Gameplay: Shooter
Published by: SEGA of America
Developed by: Code Monkeys Ltd.
Released: 1996
Platform: SEGA 32X CD
In the game Surgical Strike you have to ride through a digitized interactive video, destroying terrorists, while you do not have to harm civilians. You play as one of the Surgical Strike team members. Your task is to destroy opponents in a new experimental hovercraft, on board with a simple weapon 30 mm Gatling cannon (six-barrel) and laser-guided missiles AWACs C-130. It is with this weapon that you have to destroy the enemy in order to eventually get to the leader and stop his outrage.
‹
›
Home
View web version