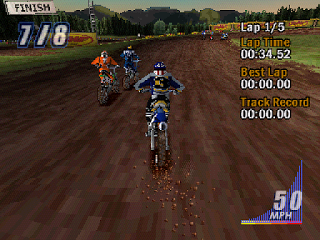 Genre: Racing / driving, Sports
Perspective: 3rd-person
Vehicular: Motorcycle
Published by: Electronic Arts
Developed by: Page 44 Studios
Released: 2000
Platform: PlayStation (PSX, PS1)
What does the player expect from an arcade simulator? First of all, the dynamics and acuity of sensations. Everything works for this, including Artificial Intelligence. You can persuade everyone for a long time that a living person will not do this in a given situation, or talk about the fact that AI-racers are just mindless extras, decoration during the gameplay. And everything said will be true. Yes, Supercross racers really aren't smart. Yes, difficulty levels differ only in speed. Yes, a real motorcyclist, caught in a traffic jam from several motorcycles, behaves a little differently, but even without this Supercross 2001 has something to keep the player busy. The game, so accessible at the beginner's level, having reached the pro, makes you think “about the eternal”. Everything becomes too fast and chaotic, sometimes you just have to look from the side of the road at the dumb opponents rushing past, but for some reason over and over again making you opponents. You can look for the cause of defeat in a poor physical model, in inconvenient control, but it is not so easy to find it there. Everything up to the opposite is decent (it was not, does not consist, does not evade), and as a result, it turns out that, despite the clumsy and fluffiness, the AI is not so bad. And too "jumping" jumps - in general, in my subjective opinion, one of the best parts of the game. On the whole, I would say, S2001 meets the requirements of the day, not much standing out among its main competitors and not losing in anything to them. And it deserves seven points for game-play.
‹
›
Home
View web version