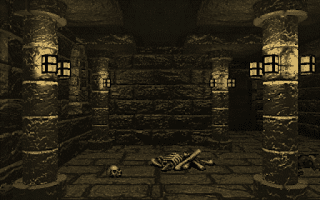 Genre: Role-Playing (RPG)
Perspective: 1st-person
Pacing: Real-time
Setting: Fantasy
Published by: Interplay Entertainment Corp.
Developed by: Interplay Entertainment Corp.
Released: 1995
Platform: DOS
It was 1995. Doom and Duke Nukem 3D ruled the world. The RPG genre was in a deep coma. Eye of the Beholder and Wizardry have died down long ago, and no one has thought about Daggerfall yet. In general, nothing foreshadowed trouble. However, it happened. Stonekeep came to the people from the hard drives of Interplay programmers and designers. No, the game did not make a revolution. The reason for this was its high difficulty and unusual gameplay. However, he undoubtedly made his contribution to the development of the Stonekeep genre. But first things first.
Let's start, as usual, with the plot. The main character, while still a little boy, lived on the territory of a prosperous castle and felt quite well there. However, one day, not too beautiful for him, the castle was covered by the evil deity Khull-Khuum and dragged him (the castle) underground. As you might guess, after such an unnatural procedure, no one was left alive. But our hero survived. How - I myself did not understand. However, this is not essential; the main thing is that he survived! Of course, he has not forgotten anything and, you understand, he has not forgiven anything. Having reached the age when young men usually sulk girls, Drake (and this is the name of the main hero) decided that the hour of retribution had come. With such a thought, he came to the place of the disaster, where the goddess of the earth, Thera, was already waiting for him, eager to help Drake. Having received a couple of parting words from the supreme being, Drake, and with him - and you, goes to the underground city of Stonekeep.
This is the plot. If the story itself does not shine with originality, it is visually executed at a very high level: already in the introductory video you will be able (if you purchase a version of the game with videos, of course) to contemplate several live actors against a pre-rendered background. It looks somewhat strange, but very impressive. Looking ahead, I will say that during the game you will come across characters performed in this way more than once.
So, the actual game. Stonekeep is a dungeon crawl (RPG subgenre, where most of the playing time is spent shredding monsters in dungeons) with puzzle elements: you will have to pull the levers, and more than once. There is only one main character - it has already been described above - however, as the game progresses, very colorful personalities will join you. However, in combat, you can only control Drake. And all this - from the first person. The fight in this case looks quite funny: you slowly swing your sword (or whatever you have), and from the edges of the screen every now and then the arms of your comrades protrude. By the way, about the battles. The battle takes place in real time and is somewhat arcade. Good or bad - you decide.
Well, what kind of RPG review is complete without describing the role-playing system? This aspect is fine in Stonekeep. Leveling is based on the principle of "what you do, what you can do". That is, if you constantly cast spells from one level-up to another, then you will undoubtedly be lucky enough to get an improvement in magical skills. Otherwise, everything is standard: hit points, strength, agility and everything in the same spirit. But magic is worth talking about separately. As you wander through the labyrinths of the dungeons, you will find a variety of runes more than once ... but you will not be able to use them. In order to cast any spell, you need a special item - Runecaster. Fortunately, he is lying on one of the first levels, so homegrown magicians will not suffer for a long time.
And in conclusion - not about the schedule. And not about the sound. In conclusion, about the atmosphere. The stunning atmosphere is one of the main advantages of Stonekeep. You really feel like you are in a castle deep underground. You feel the pressure of stone walls, you feel the dampness of the dungeons. What creates this feeling - great level design? Or maybe great music and soundtrack? It is hard to say. Most likely, all factors together.
Games often lose their relevance over the years. The same cannot be said about Stonekeep. Don't be confused by archaic VGA graphics. Just enjoy the atmosphere and gameplay and you will have tons of fun.
‹
›
Home
View web version