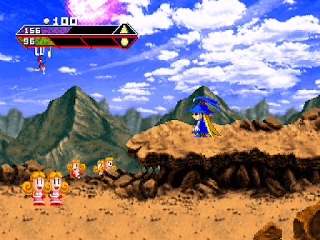 If the control keys stop responding - switch "Pad 1 Type" to Analog and then to Standard.
Genre: Action
Perspective: 3rd-person, Side view
Art: Anime / manga
Gameplay: Shooter
Setting: Sci-fi / futuristic
Published by: SPAZ, Working Designs
Developed by: Treasure Co.
Released: 1999
Platform: PlayStation (PSX, PS1)
The world of Silhouette Mirage is inhabited by creatures belonging, as the name of the game suggests, to two types: silhouettes and mirages. The main character of the game is the keeper of the balance between them and belongs to two worlds at the same time. Like many other Treasure projects, Silhouette Mirage has an unusual game mechanic around which the entire gameplay revolves and which is squeezed dry by the game to the last level. In the case of this game, the guys from Treasure looked at its two-dimensional view from a very interesting angle: when the heroine looks to the left, she belongs to mirages, and when to the right, she belongs to silhouettes. As part of the gameplay, this is expressed by the fact that you must attack enemies of the opposite type, otherwise the protagonist's attacks will not inflict any damage on them. You can also change the "polarity" of the main character at any time, but the transformation process will take a lot of time, so it will not be possible to abuse it.
‹
›
Home
View web version