Shadow of the Beast (TurboGrafx-CD) 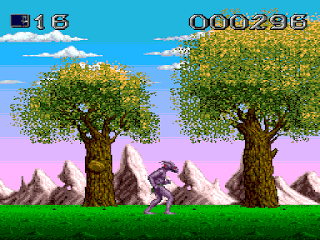 Genre: Action
Perspective: Side view
Visual: 2D scrolling
Gameplay: Platform, Puzzle elements
Interface: Direct control
Setting: Fantasy
Published by: Psygnosis Limited, Turbo Technologies
Developed by: Reflections Interactive Limited
Released: 1992
Platforms: TurboGrafx / PC Engine, Amiga
A short background: when you were still young, you (Aarbron) were taken from your parents (in other words, kidnapped) and enslaved into the clan of some fanatic Beast Lord. Turned into a real mutant and used as a weapon. Once, having done your dirty work, you walked past a sacrifice. Accidentally, seeing the face of the poor victim, it seemed to you that somewhere you had already seen him. Yes. It was your father! A memory came to you, but it was too late - father was stabbed. You vowed to avenge everything and fled the temple.
This is a story about a humanoid mutant who embarks on a long and dangerous journey to acquire a human form. You will have to fight against over 100 different alien life forms in 8 hostile territories of the supernatural World.
A popular game at one time, perhaps just for the graphics - after all, the animation of the background movement was surprisingly new at that time. On the levels you need to set some mechanisms in motion, find keys, open new levels.
The version for PCECD (as well as for FM Towns) was the last for the first part of Shadow of the Beast, which had improved (compared to the original) graphics and sound, which is not surprising.
The game was released initially on the Amiga, then on Amstrad CPC, Atari ST, Commodore 64, FM Towns, Genesis, Lynx, Sega Master System, ZX Spectrum. It was planned for the SNES too, but it was not released. Even an Atari 8-bit version was developed, but unfortunately never came out.
‹
›
Home
View web version