Shadow of the Beast II (SEGA-CD) 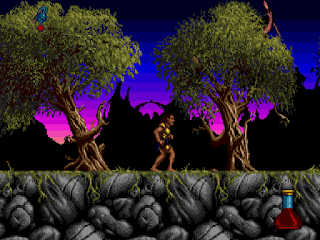 Genre: Action
Perspective: Side view
Visual: 2D scrolling
Gameplay: Fighting, Puzzle elements
Published by: Psygnosis Limited
Developed by: Reflections Interactive Limited
Released: 1994
Platform: SEGA CD / Mega-CD
The port of the game for the SEGA Mega CD is considered one of the best, as it has been significantly improved in relation to the original on the Amiga and is full of FMV. The graphics in the game have also been improved. You take control of a man named Aarbron, he is just starting to transform from a monster into a man and is in an early stage of development. His main task is to save his sister, who was kidnapped by Zelec from her mother's house. As the game progresses, you have to fight, solve various riddles and carry out various assignments.
‹
›
Home
View web version