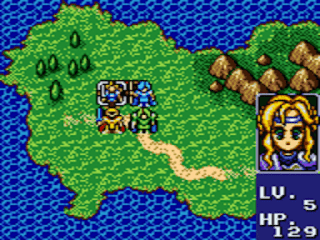 Genre: Role-Playing (RPG)
Perspective: Behind view, Bird's-eye view
Visual: 2D scrolling
Art: Anime / manga
Pacing: Turn-based
Gameplay: Japanese-style RPG (JRPG)
Interface: Direct control, Menu structures
Setting: Fantasy
Published by: SEGA Enterprises Ltd.
Developed by: SEGA Enterprises Ltd.
Released: 1995
Platform: SEGA Game Gear
The Royal Stone storyline is a sequel to the Crystal Warriors! The game follows the story of Eva, the former Knight of Martalia, exiled from the kingdom for having her squad treacherously flee the front lines in an act of sheer cowardice. The game is played in the same way as its younger sister, the enemies are unknown until you investigate them, or do not fight several times. Each character has an element that makes him or her strong against some and weak against others.
‹
›
Home
View web version