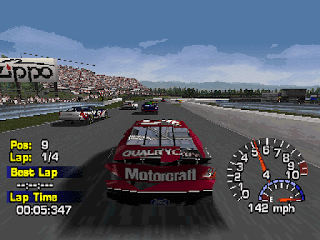 Genre: Racing / driving, Simulation
Perspective: 1st-person, Behind view
Vehicular: Automobile, Track racing, Vehicle simulator
Published by: Electronic Arts
Developed by: EA Black Box
Released: 2001
Platform: PlayStation (PSX, PS1)
Drivers! Start Your engines! - this is how the legendary NASCAR race begins. This time, the developers have finalized the game engine, introduced a new career mode and a new level of interactivity. You can ride on 25 real (including the new Chicagoland Speedway and Kansas Speedway), and five nonexistent tracks. You can also create your own car, racer and guide it the hard way to victory. Despite the fact that the game was developed for the next generation of consoles (PlayStation 2 and XBox), the developers have made every effort to ensure that the game looks good on the PlayStation.
‹
›
Home
View web version