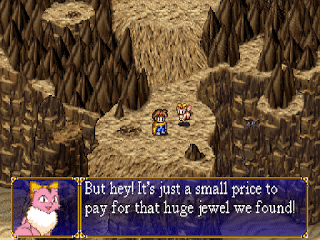 Before swap CD, save state to file, next CD, upload save state file, press button in game to resume.
Genre: Role-Playing (RPG)
Perspective: 3rd-person, Top-down
Art: Anime / manga
Pacing: Turn-based
Gameplay: Japanese-style RPG (JRPG)
Published by: Working Designs
Developed by: Game Arts Co.
Released: 2000
Platform: PlayStation (PSX, PS1)
Lunar 2: Eternal Blue Complete is a remake of Lunar: Eternal Blue, which was originally released for the SEGA CD expansion. It is part of the Lunar game series.
As with the first game in the series, Lunar 2 received a lot of positive reviews for the sheer amount of material used in the game. Characters, whose characteristics and skills are now easier to develop, have become especially attractive to players. As for the two main characters, a passionate romance flares up between them as the storyline progresses. A large number of dialogues have been added to the game, worked out to the smallest detail. The game features several anime style FMV intros and a soundtrack that has been well received by the player community. Also, after the end of the events of the main storyline, players will be able to complete an additional chapter - the so-called "Epilogue", which is an optional part of the adventure, but allows the player to freely travel the world and see the second, "real" ending of the game.

The game takes place about a thousand years after the events of Lunar: Silver Star Story Complete. Once again, Lunar (the inhabited moon orbiting a planet called The Blue Star) is threatened with destruction by Zophar, the evil deity responsible for the destruction of life on the Blue Star millennia ago. The return of Zophar was the catalyst for the awakening from a long sleep of Lucia, a girl on whose shoulders the most important mission was entrusted: to revive life on the Blue Star and save her from the oppression of Zophar. Narrated by Hiro, a young archaeologist who lives with his grandparents and the tame young dragon Ruby (which closely resembles the winged cat from the previous game in the series, Nall) in the Salyan Desert. The story begins in a local ruin, where Hiro and Ruby steal the Dragon's Eye gem. After the stone is at Hiro, a trap is activated, as a result of which the heroes flee from the ruins teeming with monsters and other numerous traps. On their way back to the research outpost, the heroes are stopped by one of Althena's guards, the arrogant and noisy White Knight Leo, who informs them that a Destroyer has appeared in the northwest of the ruins. so he asks the heroes to return home immediately. Arriving home, the heroes find Leo, who is trying to find out information about the nearby ruins (called The Blue Spire) from Hiro's grandfather, Gwyn, an elderly archaeologist, in the hope that he will help Leo get inside the inaccessible ruins. Realizing that Gwyn is of little use, Leo leaves to contemplate the appearance of the so-called "Destroyer". When Hiro climbs onto the roof of his abode, he witnesses a mysterious light emanating from the Blue Spire. He tells his grandfather about the recently seen glow, and the three of them set off to explore the ruins.
‹
›
Home
View web version