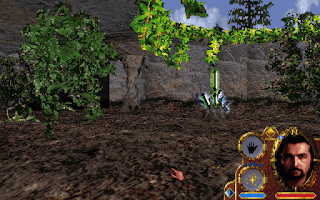 Genre: Role-Playing (RPG)
Perspective: 1st-person
Gameplay: Action RPG, Puzzle elements
Setting: Fantasy
Published by: Virgin Interactive Entertainment
Developed by: Westwood Studios
Released: 1997
Platform: DOS
Lands of Lore: Guardians of Destiny is a sequel to the original Lands of Lore. As in the first part, learning and adventure are key. Escaping from the Gladstone fortress, you ended up in Draracle Caves, where, in fact, a new adventure begins, rest assured that you will wander around them for a long time ...
You still start from scratch, a crowd of evil knights hunt for you, funny dungeons, caves, fortresses, character development, transformations - in general, everything is like in a regular Munchkin RPG like M&M, but it's not M&M, so it won't be boring. Those who like Heretic / Hexen will definitely like the RPG LoL2 series, however, others will appreciate, for example, the fact that knights are knights, and ordinary dungeon dwellers do not care about you, unless you stand in their way, but if you do not carry them out, you will not get experience; in general, decide for yourself!
‹
›
Home
View web version