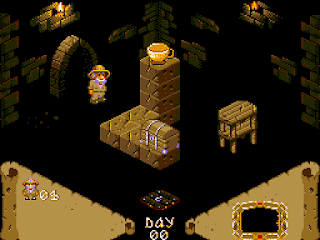 Genre: Action
Perspective: Isometric
Gameplay: Platform, Puzzle elements
Setting: Fantasy
Published by: RetroWorks
Developed by: RetroWorks
Released: 2009
Platform: MSX
The player takes on the role of Sabreman again; he must find the master Melchior and go around the entire castle in order to find the ingredients required for the potion. After the ingredients are collected, they must be delivered to Cupronickel and dropped into the waiting cauldron. If the task is successfully completed within 40 days, then Sabreman is freed from the curse of lycanthropy that he received in the game Saber Wulf.
The curse of the werewolf itself plays an important role. Starting the game as Sabreman, the player periodically turns into a wolf, at the moment when day turns into night (the transition is shown by the indicator of the movement of the sun and moon, in the lower right part of the screen). At the moment of transformation (into a wolf or vice versa), the Sabreman has a short seizure (animated with a touch of humor) and is vulnerable to enemies and dangers. Some enemies (including Melchior's cauldron) attack Sabreman in the role of a werewolf, which makes it important to choose when the player performs actions.

A man who was subjected to a spell and became a werewolf makes a trip to the castle to the dying wizard Melchior, so that he can help free himself from the spell. There are only 40 days and nights to find a potion that can destroy witchcraft, otherwise the hero will remain a werewolf forever.