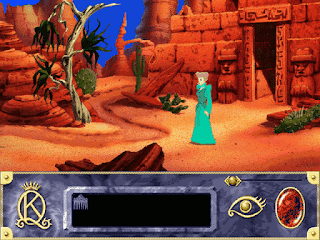 Genre: Adventure
Perspective: 3rd-person
Gameplay: Graphic adventure, Puzzle elements
Interface: Point and select
Setting: Fantasy
Published by: Sierra On-Line
Developed by: Sierra On-Line
Released: 1994
Platform: DOS
Princess Rosella is twenty years old, but at heart she is still a child. Dreams of fabulous adventures do not leave her for a minute. But her mother, Valanice, constantly reminds her that she needs to support her royal status by marrying a noble prince, fortunately, there is someone to choose from. For example, Prince Flockmodn. But he is so boring, mom ... And then what happens to young children who do not obey their parents: miraculously, Rosella is captivated by some troll who dragged her to his underground kingdom, and Valanice, jumping after her daughter, ended up in a lifeless desert ...
The game is divided into six chapters, and in the odd-numbered chapters we will control the queen, and the even-numbered princess. You can start playing right from the final episode, all six are available initially. 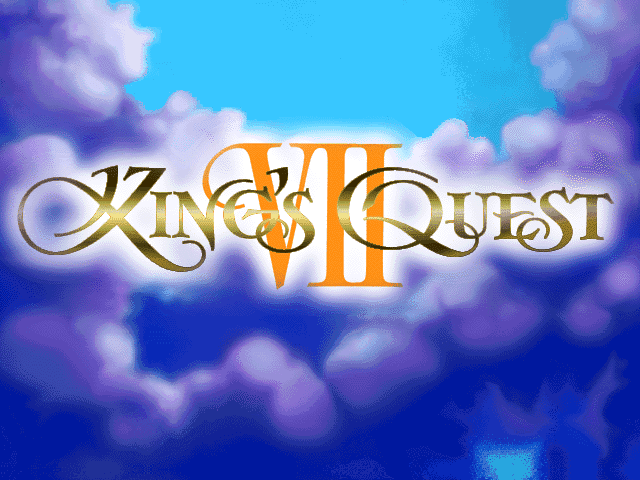 Only then will you miss one of the greatest quests of all time. Of course, when compared to Full Throttle or Grim Fandango, the game will seem childish. But the first impression is deceiving. KQ7 is one of the most difficult and intricate quests, and all actions in the game are quite obvious: if the Moon has fallen from the sky and you are required to return it to its place, of course, you need to make a slingshot and launch the Moon back into the sky. So there is a tree, it remains only to pull on some rubber band ... in principle, a rubber chicken will do just fine, but what to pay for it? Yes, besides, you can't just go to this store of all kinds of junk, you need to taste the salt before that, but where can you get the salt? I remember that in the first chapter it was necessary to take a walk ... Lord, how could I forget, but how to catch the Moon out of the pond ?!
A big “thank you” should be said to the artists and animators of King’s Quest 7, because what they have done can compete on equal terms with any game of its genre in the “Most Beautiful Quest” nomination. Several completely dissimilar kingdoms and worlds, each of which is worked out to the smallest detail. The picture is just perfect, sometimes you catch yourself thinking that you are watching a cartoon from Disney, and not just playing a quest from Sierra - everything is so great.
All sound effects are performed at the level, and if there is nothing to say about music (great music - what can I add here?), Then the speech of the characters is simply magnificent. KQ7 is saturated with subtle, sometimes black (exclusively in the kingdom of Uga Buga, a kind of kingdom of death and misfortune of a local spill), humor, which only once again fuels our interest in further passing the game.
If you love beautiful stories, high-quality games or you just need to relax tonight - feel free to start playing King's Quest 7 - these games are no longer made.
‹
›
Home
View web version