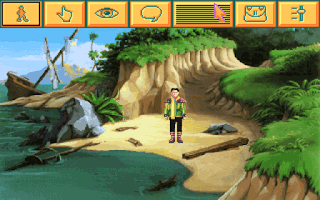 Genre: Adventure
Perspective: 3rd-person
Gameplay: Graphic adventure, Puzzle elements
Setting: Fantasy
Published by: Sierra On-Line
Developed by: Sierra On-Line
Released: 1992
Platform: DOS
King's Quest VI was created using the Sierra's Creative Interpreter engine and was the last game in the series to come out on floppy disks. A CD-ROM version of the game was released in 1993 with improved graphics and sound.
The plot of the game is a continuation of the events shown in the finale of King's Quest V. King Graham's son, Prince Alexander, sets off in search of the beautiful princess Kassima, daughter of the King of the Green Isles, but is shipwrecked at the very destination of the trip. Now Alexander has to defeat his evil rival - the vizier Alhazred and win the heart of Kassima.

King's Quest VI is a point-and-click 2D adventure game. To control the game, the player uses the graphical panel located at the top of the screen with buttons that allow you to perform actions: walk, watch (while the narrator describes the selected object), use and speak accordingly. King's Quest VI is the second game in the series to use a similar interface: King's Quest V used it as a new feature of the SCI1 engine. All previous games in the series used a text parser that required the player to type commands and actions on the keyboard instead of selecting them on the screen. 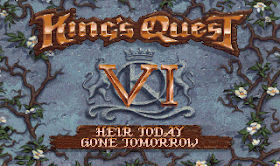 Most of the gameplay is occupied by solving puzzles. Among them are logic tasks and interaction with characters through dialogues or using collected items. One of the puzzles requires finding information in the Guidebook to the Land of the Green Isles, which was included in the game box. In addition to providing additional information about the world of the game, this booklet played the role of a copy protection tool: without it, the player could not solve the problems on the Cliffs of Logic that precede the visit to the Island of the Sacred Mountain. The booklet also includes a poem in which the solution to one of the puzzles in the maze of the island is encrypted. In the reprinted version, the booklet was included in the user manual on CD.
Solving problems in the game usually requires moving between the islands of the game world, which is achieved thanks to the magic card. Although the concept of traveling with a magic card was used in earlier games in the series, such as King's Quest III, it works differently in King's Quest VI, as the card can only be used to travel between islands that cannot be reached on foot.

The game takes place almost entirely in the fictional kingdom of the Green Isles. The kingdom consists of several islands, which are described as far removed from the rest of the world. The player can move between different islands after he receives a magic card.
In the center of the kingdom is the Isle of the Crown, which is inspired by the theme of the Thousand and One Nights. The Isle of Wonder is inspired by the tale of Alice in Wonderland, and the Isle of the Sacred Mountain theme draws inspiration from classical mythology. Isle of the Beast is densely wooded and protected by magical barriers. In addition, there are hidden areas in the game. One of them is inhabited by the Druid tribe, while on the other the player can meet Death.
The game begins with a scene where Prince Alexander is haunted by the memories of Princess Kassima, whom he met at the end of King's Quest V when they were both rescued from the evil sorcerer Mordack. After the prince observes the vision of Kassima in the magic mirror, which his father received in the first part of the series, Alexander equips the ship and goes to find the princess. At the beginning of the game, he is shipwrecked on the coast of Crown Island, where he learns that the vizier Abdul Alhazred has seized power in the absence of Kassima and plans to force her to marry her. Alexander needs to explore the Kingdom of the Green Isles in order to find the necessary items that will help him save Kassima from the vizier.
‹
›
Home
View web version