Jones in the Fast Lane (DOS) 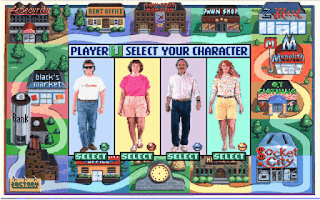 Genre: Simulation, Strategy / tactics
Perspective: Top-down
Visual: Fixed / flip-screen
Pacing: Turn-based
Gameplay: Board game, Life / social simulation, Managerial / business simulation, Turn-based strategy
Interface: Menu structures
Setting: Contemporary
Narrative: Comedy
Published by: Sierra On-Line
Developed by: Sierra On-Line
Released: 1991
Platform: DOS
Perhaps few people think about it, but it turns out that our daily life is sometimes no less dangerous than in any extreme conditions of a desert or another planet. And the difficulties that can befall the inhabitant of the stone jungle are much worse than animals from the jungle of Africa or monsters from Mars.
For some reason, it is generally accepted that "life simulators" began with The Sims, which spawned a huge number of sequels. But actually it is not. Before you - the very first "life simulator", which still quite (though still and with some stretch) can be called a role-playing game.
At the beginning of the game, you have your character. This is (horror !!!) an ordinary person. He is surprisingly insignificant and pathetic. He can’t do anything. He has nothing but what he is wearing. And he wants only one thing - to survive. You will have to help him in this.
In fact, of course, everything is not so bad: we still have something at the beginning of the game, this is adjusted before the start, as well as what we want to achieve is chosen (the "higher" our request for life goals, the the game will be longer, but still it is ALWAYS quite finite for itself).
The first thing anyone needs is food. To be able to buy it, you need to have money. To have money, you need to find some kind of job, moreover, such that the salary is enough for even meager food. Then, with the growing needs of our protégé, we will have to look for another job, because, as they say, “you won't be full of bread alone”. But the trouble is - to make a lot of money, you need to be a qualified specialist, to be able to do something well. And to become like that, you need to go to study. Moreover, combine study with current work. And it’s better not to even try to get a job where they don’t take. After all, the game is limited in time, so time is money ...
And then begins what should begin - the all-round development of the abilities of the person entrusted to us and the achievement of the goal set at the beginning of the game - as the hero of the novel "Little Caesar" said, "to be someone." Who - depends on our choice. Having gotten a little rich and having already ceased to feel fear of hunger and the starry sky above his head instead of a ceiling, having received some kind of education, our person will have the opportunity not only to have fun, but also (here is the impudence!) To think about how to reduce the way from home to work ...
The graphics of the game are non-standard, but you can't call it "flawed": it's just that at first it's rather difficult to understand where is what on the screen. The interface is pretty difficult. As, however, the game itself.
But still, this is what is called a "thing" - it is difficult to find analogues. No, this is not The Sims, this is really serious (and even slightly frightening with this seriousness and truth of life) the very "simulator of an ordinary person of our time" that you so longed to find in your dreams. Therefore, it is recommended, first of all, to fans of everything unusual - including because there are still no alternatives.
‹
›
Home
View web version