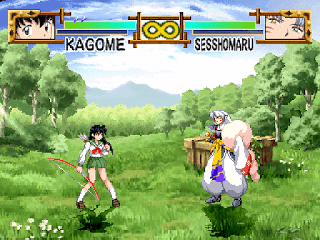 Switch to Enable "InuYasha Sengoku Battle Fix" and restart emulator.
Genre: Action
Perspective: Side view
Visual: 2D scrolling
Art: Anime / manga
Gameplay: Arcade, Fighting
Published by: Bandai America
Developed by: Dimps Corporation
Released: 2003
Platform: PlayStation (PSX, PS1)
A fighting adventure with characters and based on the eponymous manga and anime series by Rumiko Takahashi - InuYasha (Great Dog Demon). The manga, with a total of 558 chapters, was completed in June 2008. The anime adaptations of the work include two TV Series (167 and 26 episodes, in which the action covers 36-56 volumes of manga) and 5 feature films. The story begins in Tokyo with a high school student named Kagome Higurashi. Her family has owned a Shinto shrine for several generations and lives in it. One day, on the way from school, Kagome enters a small building in which there is an old well - her younger brother Sota told her that their house cat, Buyo, fell into the well, but Sota himself is afraid to enter the annex. When Kagome approaches the well, a centipede demon attacks her from it, demanding to give her the Jewel of Four Souls. Kagome manages to somehow fight off the demon, but when she gets out of the well, she finds herself in medieval Japan (Sengoku period) and is in the forest. Near the well, she sees a tree to which a young guy with dog ears is chained by an arrow.
‹
›
Home
View web version