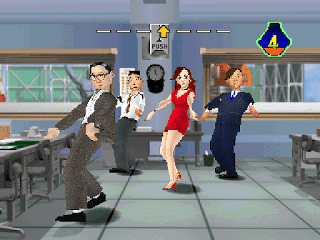 Genre: Action
Perspective: 3rd-person
Gameplay: Arcade, Music / rhythm, Puzzle elements, Shooter
Published by: Titus Software Corporation
Developed by: Polygon Magic
Released: 2000
Platform: PlayStation (PSX, PS1)
In this game, you first play the role of Toneo, and three other members of his family join in the following stages. Toneo has to return home from the office to celebrate his grandmother's birthday. It all sounds very simple, but before you achieve your goal, you will need to win 24 mini-games, which are extremely varied, sometimes even surreal, which gives the game a certain originality. It is impossible to get bored, especially since the game is rather short. During the first stage, you see an indicator on the screen, which swells depending on your mistakes, and when it reaches its maximum, your character literally explodes and, naturally, the game ends.
In the first stage of the game, Toneo and his colleagues are going to dance to relieve stress after a hard day. The goal of the player is to press the buttons to the beat of the music, according to the "directions" at the top of the screen. Toneo looks very cute and his co-workers are pretty funny. In general, the first stage looks very fun, bright, graphically executed perfectly and, of course, will give you pleasure.
After successfully completing the first stage, watch the video scene in which a giant ball rolls into the room, crushing everything around. And now Toneo must race with all his might, trying to escape this ball, jumping over various obstacles, making his way through the corridors. He must shoot a giant pink teddy bear, escape a sinking ship, and when the stage with Toneo ends, control switches to his wife Etsuko, then to his son Tsuyoshi and finally to his youngest daughter Ririka.
Numerous surprises await you in the game. You will find yourself involved in a robbery, transform into tiny ant-sized creatures and, in the course of your adventures, meet with a huge alien spaceship. Continuously changing game plots and numerous mini-games will definitely delight you, and you will simply be surprised by the unexpected plot twists in the game. If we add to this great graphics, soundtrack and humorous situations, then it is possible that this game will attract not only the attention of children, but even their parents. Unfortunately, as we said, the game is too short, but you can play it several times and thus prolong the fun.
The game describes the story of one, not very normal, family. They had an amazingly interesting, adventurous day, and you have to consistently play as all four members of this family, fight huge teddy bears, rescue unidentified flying saucers, and even run away from terrible killers on a snowboard. In the meantime, your grandmother is sitting alone in the house, despite the fact that it is her birthday. In general, you understand what kind of company it is. The game, by the way, is very intense. We'll have to do some good finger work. It's good if you are experienced enough and keep in good shape, but otherwise you need to warm up and work out properly.
‹
›
Home
View web version