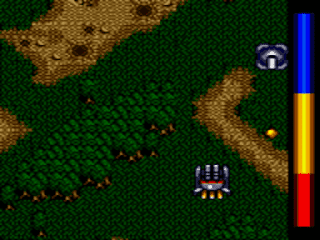 Genre: Action
Perspective: Top-down
Visual: 2D scrolling
Gameplay: Arcade, Shooter
Vehicular: Tank
Setting: Sci-fi / futuristic
Published by: Telenet Japan Co.
Developed by: Renovation Game
Released: 1991
Platform: SEGA Game Gear
The game is a walker-shooter, only you will have to control not a superhero, but heavy military equipment - a tank. Top view and not bad graphics included. Our tank gets through the forest area from point A to point B, destroying enemy tanks and turrets along the way. Despite the general primitiveness of the action, it is quite interesting to play.
‹
›
Home
View web version