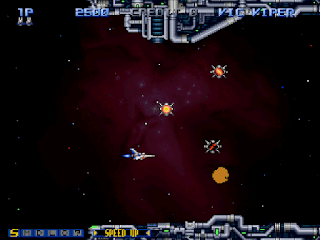 Genre: Action
Perspective: Side view
Visual: 2D scrolling
Gameplay: Arcade, Shooter
Setting: Sci-fi / futuristic
Published by: Konami Co.
Developed by: KCE Tokyo
Released: 1997
Platform: PlayStation (PSX, PS1)
The basic gameplay of Gradius Gaiden stays true to the series. However, two ships are added, whose armament configuration is new. In addition, there are various changes to the weapon mode. Many weapons and builds from Gradius III have disappeared, although in exchange you can choose between 4 different ships, with a unique weapon configuration. It also adds a function already seen in the Gradius of the MSX, and, above all, in Salamander 2; the possibility of increasing the power of missiles and lasers. Another addition to mention is a new shield, called 'Limit', which provides invulnerability for 3 seconds.
The difficulty level can be adjusted from very easy to very difficult, going through a total of 7 difficulty modes. In the easiest, the most complex boss attacks are eliminated and the number of ships on the screen is drastically reduced.
Finally, you can choose the order of appearance of each element in the weapon bar, placing, for example, the shield at the beginning and the double shot at the end. This option has only been seen in this game, and it can be very useful.