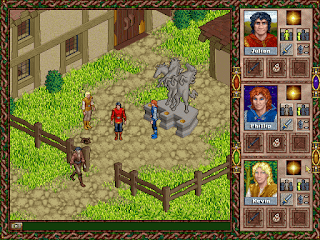 Genre: Role-Playing (RPG)
Visual: Isometric
Setting: Fantasy
Published by: Encore
Developed by: Dreamers Guild
Released: 1997
Platform: DOS
The sequel, released eight years later. The game takes place in the country of Farr, where three brothers under your control are sent to fight against Evil.
As in the first part, the fantasy world of the Farr country is impressive in its scale. There are many cities and villages, each of which has something to do for three brothers.
It only remains to add that the perspective in the game is isometric, the graphics vividly resemble Ultima 8, as well as the interactivity of everything around. Battles can be called phased - during your turn, everything is suspended, and gives time to think about further actions.
An interesting RPG, especially for those whom the graphics of the first part managed to dissuade from playing it. Now there is hardly a reason not to help the three brothers.
‹
›
Home
View web version