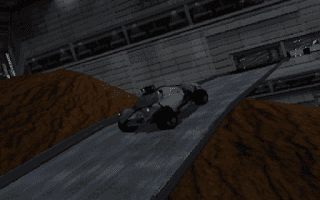 Genre: Action
Perspective: 1st-person, Behind view
Art: Video backdrop
Gameplay: Rail shooter
Setting: Cyberpunk / dark sci-fi
Published by: Virgin Interactive Entertainment
Developed by: Xatrix Entertainment
Released: 1995
Platform: DOS
In 1994, Cyberia was born - an adventure that was born from the symbiosis of a rail shooter and a puzzle. The game was originally released for DOS, but two years later it was ported to several consoles, including 3DO, on which I had the pleasure of playing it.
The year is 2027: five years have passed since the end of the Third World War, the world has divided into two warring camps - mafia formations from all over the world united into a single Cartel and the Free World Alliance (FWA), in theory, trying to stop the world from falling into anarchy , in fact, who established a cruel tyranny that deprived humanity of at least some freedom ... The game told us the story of the not-so-successful hacker Zak Kingston, who was sentenced to life in prison on charges of treason and espionage. Zak is dragged out of prison by FWA General Devlin, promising freedom in exchange for a secret mission to uncover mysterious weapons of mass destruction. There is no point in retelling the entire plot, it is only important that at the end of the game, Zak, merged with the artificial intelligence of Cyberia, piloting a new generation tactical fighter TF-22, destroyed the FWA orbital station, which served as the Alliance's main headquarters, but crashed himself ...
A little earlier than porting the game to the console, back in 1995, a sequel was released - Cyberia 2: Ressurection, now available to both DOS users and Win 95 owners.
What new has brought us the second part? Move the "arcade --- | --- puzzle" slider towards the arcade. There were an order of magnitude less puzzles, more shooting, and the game itself seemed to me shorter ... However, less does not mean worse.
After the destruction of the orbital station, uprisings against the tyrannical regime began to flare up around the world, people began to unite into a single force ... The underground rebel movements did not have sufficient resources for open actions, but undermined FWA activities in all possible ways.
It just so happened that the authorities do not like to give up expensive weapons ... A rescue expedition was sent to the place where TF-22 crashed, retrieving Zak from the wreckage of the plane. A certain Dr. John Corbin was in charge of the operation. This person took part in the work on the Cyberia project, but was quickly removed from them. Why? Dr. Corbin devoted his whole life to weapons of mass destruction, and he also wanted to use Cyberia exclusively for military purposes ... Then the FWA leadership did not agree with his views ... Now the Alliance was led by other people, and the world was no longer the same - when the rebels are at hand, any methods are good, and John Corbin was once again in business. Zak was separated from Cyberia and placed in a cryochamber, and from his tissues, altered under the influence of a cybernetic organism, a nanoweapon was obtained, a deadly virus that promised to be the decisive word in the war against the rebels ... However, the rebels, which include his daughter Dr. Corbin, Novelle, will find out about Zak and the new weapon. Moreover, it turns out that a "vaccine" can also be obtained from a hacker's blood - the only weapon in the fight against a newly created virus. Novella makes his way to Zak's cryo chamber and frees him ... This is where the fun begins.
The main part of the gameplay has remained practically unchanged - we are moving somewhere, controlling only the sight and shooting numerous opponents that arise in our path. It is worth noting a certain variety brought to the game - now in the arcade part we not only fly by plane, but also travel by car and even run along narrow corridors on foot. However, the shooter, as it was on the rail, remained so.
The shooting of the FWA forces is interspersed with great videos, which were performed great in the first part, and puzzle solving. The latter have become, as already mentioned, fewer, but they still require from the player not only patience and some logic of thinking - attention to detail also plays a huge role. You can lose Zak in the claws of cybernetic bats a dozen times due to an incorrectly typed color code, before the thought occurs to take a closer look at the glasses on the shelf nearby.
Another undoubted plus of the second part: the number of characters helping Zak in his difficult business has increased. In addition to Major Novelle Corbin, Dr. Richards (Dr. Corbin’s main assistant, in fact, his right hand, disagreeing, however, with the goals of his leader) and Graham (a dark-skinned fourteen-year-old hacker, a genius of his craft) will be on our side. The famous specialties of Zak BLADES (Bi-optic Low Amplitude Displayed Energy System) are now controlled by Graham, he also helps us in breaking electronic locks and other security systems.
So what do we end up with? The sequel moved away from the puzzles and lost some degree of non-linearity, which did not affect the playability at all. If you liked the first part of Cyberia, you just need to play this one too. For those who encountered the series for the first time, it is not at all necessary to look for the previous game - Cyberia 2 absolutely does not require knowledge of the details of the background to understand the plot, which makes it, in some way, a completely independent project.
‹
›
Home
View web version