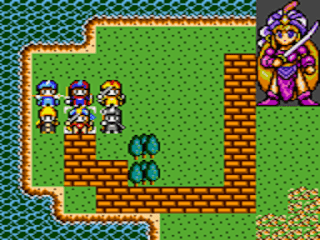 Genre: Role-Playing (RPG), Strategy / tactics
Perspective: Top-down
Art: Anime / manga
Pacing: Turn-based
Setting: Fantasy
Published by: SEGA of America
Developed by: SEGA Enterprises Ltd.
Released: 1992
Platform: SEGA Game Gear
A good tactical RPG that you can play with pleasure. A bit tricky, but I love Shining Force games! Plot: peace and quiet reigned on the Tyramus continent for over a century. And all thanks to the four elemental crystals of the kingdom of Arliel. But everything is never smooth. A horde of warriors from the Jyn Empire began to conquer more and more of the continent. Led by Emperor Grym, the Jyn Empire sought to suppress the Tyramus people and take all power into their own hands, including the legendary four crystals. But they found only three. And besides, Iris, the princess of the kingdom of Arliel, is also missing. In anger, Grym sent everyone in search of the last crystal and the princess. The story begins! You play as the missing princess. I will not indicate what you need to do on the mission, so it's understandable. Everyone to play!
‹
›
Home
View web version