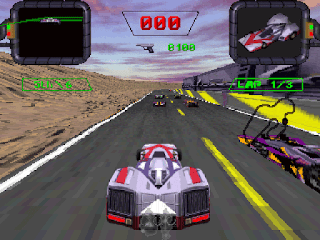 Switch "Crash n Burn fix" to Enabled and restart emulator to skip Total Eclipse demo loops.
Genre: Racing / driving
Perspective: 1st-person, Behind view
Gameplay: Arcade, Shooter, Tricks / stunts
Vehicular: Automobile, Track racing
Setting: Sci-fi / futuristic
Published by: Crystal Dynamics
Developed by: Crystal Dynamics
Released: 1993
Platform: 3DO Interactive Multiplayer
Crash and Burn is a superb post-apocalyptic cyberpunk racing game. The game takes place in 2044 from the birth of Christ, after a serious cataclysm. People have nothing to do but entertain themselves with killer races, in futuristic cars, armed with a lot of arsenals. The races themselves are very beautiful, everything is done in 3D, there is a view from the car's cockpit. The trails are winding with changing terrain and tunnels. You also need to choose one of 6 characters, each of which has its own characteristics. You will have to ride more than 30 tracks, test 28 types of weapons. Between races we will see videos about the character we are playing for.
At the beginning of the game, we are shown a demo of the Total Eclipse game.
‹
›
Home
View web version