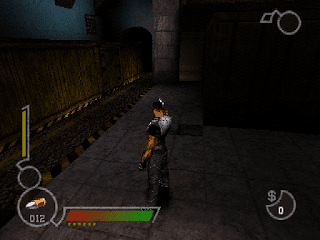 Genre: Action
Perspective: Behind view
Gameplay: Shooter
Narrative: Horror
Published by: Activision Publishing
Developed by: HammerHead Ltd.
Released: 2000
Platform: PlayStation (PSX, PS1)
You start as a super vampire slayer and fight a wide variety of monsters of the night until you finally get to the most important and terrible (Night Beast). At your service a wide variety of weapons - from swords to grenades, as well as very impressive hand-to-hand combat techniques. During fights, you can use the Auto Aim mode (automatic aiming). However, you shouldn't rely on it too much. The most important thing is your reaction, and it should be lightning fast, otherwise nothing will help you. So before starting the game, knead your fingers properly, otherwise you will obviously not live to see the morning. The game is very well integrated with excellent excerpts from films, in which you see impressive fights with vampires, as well as pictures from comics. Therefore, fans of this genre will certainly be pleased. So, grab the head of garlic (vampires are terribly afraid of him) and the crucifix, and full speed ahead!
Interesting: I think everyone knows that the Blade game for PlayStation is based on the film of the same name with Wesley Snipes in the title role, while the film itself is based on comics from the Marvel publishing house. But did you know that Blade comics are spin-offs from the original Tomb of Dracula comic series.
‹
›
Home
View web version