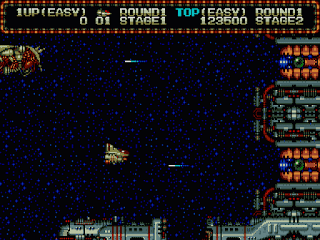 Genre: Action
Perspective: Side view
Visual: 2D scrolling
Art: Anime / manga
Gameplay: Arcade, Shooter
Setting: Sci-fi / futuristic
Published by: Toaplan Co.
Developed by: Toaplan Co.
Released: 1991
Platform: SEGA Genesis / Mega Drive
As in other Martian shooters, the objective is to kill all the enemies that appear on the screen and avoid colliding with bullets, enemies, or decorations. There are bosses in the middle and end of the phase that do not disappear until they are killed. The player, a "Zig" ship, has several attack modes:
Using the cannon: scatter shot (red weapon), laser (blue weapon) or guided missiles (green weapon).
Hitting minor enemies with the extra ships that appear around the "Zig".
If shot, they release buffs that appear in the following sequence: red weapon, blue weapon, green weapon, and speed. A shield also occasionally appears that attaches to the nose of the ship. After taking the first upgrade, two small ships surround the "Zig", and follow its movements. These ships are indestructible and can be used as a shield. As they sometimes approach the "Zig" when colliding with enemies or scenery, they alert the player to exercise caution.
Each of the three weapons has three power levels. Each time the same repeated weapon is picked up, the power level increases. If you take another one, it starts again at level 1, unless you are already level 3. There is also a special upgrade at levels 1-1 and 4-3 that increases weapons to a special level that cannot be reached. else. In the intro, the "Zig" windows are green, but during the game they change depending on the weapon the player has.
‹
›
Home
View web version