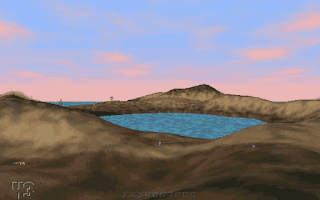 Genre: Action
Perspective: 1st-person
Gameplay: Arcade, Shooter
Setting: Sci-fi / futuristic
Published by: Auric Vision Ltd.
Developed by: Maddox Games
Released: 1998
Platform: DOS
The year is 2097.
A group of planets with resources being developed on them is united into a network of mines, completely controlled by a computer, this is Z.A.R., Zones for Artificial Resources.
November 28, 2097
"As a result of a meteorite hitting the central computer, it got out of control and became a science fiction classic, starting to build combat robots and capture all the planets in the sector, which was successfully hushed up by the media."
On November 29, 2097, radio, television and news agencies made the Z.A.R. the central theme of the day.
Z'TV
- To our inquiry to the Far Space Research Control Center “Were among those produced in the Z.A.R. robots military and paramilitary robots used to capture newly discovered planets with intelligence? Have the Z.A.R. spaceships capable of reaching Earth? " Vice President of the Center for Far Space Research John Broad replied unequivocally - NO.
N & RADIO
- The military denies that the Z.A.R. produced any weapons and military robots.
News Net
- To investigate the causes and consequences of the accident, a WASSA specialist, known as the Hermit, was sent to the disaster zone, who became widely known after the successful completion of Operation Missionary. According to WASSA and Z.A.R. FUND Corp. the mission is not military in nature. The world community is seriously alarmed by the fact that for a purely peaceful exploration in Z.A.R. send super-professional ...
On November 29, 2097, WASSA employee Ellen McKay changed the access code for the Hermit file in the computer archives. From that day on, only three people on Earth have access to the personal file of the Hermit, one of them, as you might guess, is you, the Hermit ...
‹
›
Home
View web version