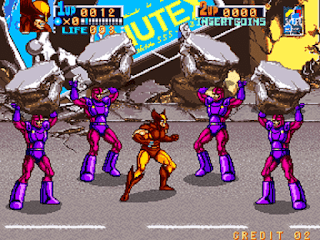 Genre: Action
Perspective: Side view
Gameplay: Beat 'em up / brawler
Published by: Konami Co.
Developed by: Konami Co.
Released: 1992
Platform: Arcade Machine
The X-Men are sent to stop a group of Sentinels commanded by Magneto. However, while they are gone, Magneto kidnaps Professor X and Kitty Pryde, forcing our team of heroes to go to M Island to rescue them. The X-Men manage to rescue Kitty and soon after they have the Professor, who was actually Mystique in disguise and she lures them into a trap. After exiting the trap, the X-Men receive a mental call from the Professor, telling him that he is on asteroid M. The team arrives at that place and save the Professor after defeating Mystique as Magneto and after defeating the real Magneto, the team. and Professor escape from asteroid M before it explodes.

The game has as playable characters Wolverine, Cyclops, Colossus, Nightcrawler, Storm and Dazzler. It has some villains like Magneto, Mystique, Juggernaut, Pyro, Blob, Wendigo, Emma Frost, Nimrod, and the Living Monolith. We also have allies like Professor X and Kitty Pryde.

The objective of the game is to progress as much as possible while surviving the attacks of Magneto and his henchmen. The character can move to all directions, jump, hit and also has a special attack that is activated with an extra button. The latter is very effective, but it will cost you a few health points. Normally, a character who has less than four health points can no longer use any mutant powers, but it is also possible for characters to gain additional mutant powers that can be stored as items. In the Japanese version, power items are consumed before health, and there are also power-ups and health packs at all levels.
‹
›
Home
View web version