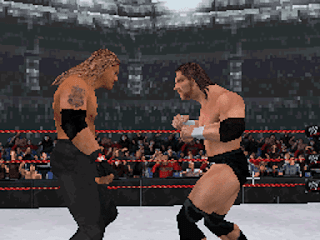 Genre: Sports
Perspective: 3rd-person
Sport: Wrestling
Published by: THQ Inc.
Developed by: Amaze Entertainment
Released: 2007
Platform: Nintendo DS (NDS)
Each fighter will now have only two fighting styles, one primary and one secondary. Each fighting style will have its advantages and disadvantages in particular types of fights. Eight fighting styles have been created, among which each fighter can use only two:
The final movement of the wrestler must be related to the primary style chosen.
A new surrender system was included, incorporating more movements with the analog stick in the game. The player applying the key can now decide how much pressure is applied by moving the lever in a certain direction. Instead, the player to whom the key is applied will have the ability to break the key by moving the lever in a certain direction.
The "Season" and "General Manager" modes from the previous games were merged into a new mode, "24/7". Here the player must climb the WWE rankings to win a world championship at WrestleMania, then become a legend in WWE and finally be inducted into the Hall of Fame after completing a list of objectives. Depending on various factors of each fighter, the difficulty to become a legend will vary.
Additionally, SVR 2008 will be the first title in the series to include the revived ECW that will be treated the same as the established RAW and SmackDown! trademarks, expressed by THQ as an "Invasion of ECW". Despite the inclusion of the brand, the video game voting right will retain its SmackDown! vs. Raw 2008, although an early logo included the "Invasion of ECW". Also, it was indicated by Cory Ledesma that he plans to redo the animations of the wrestlers.
There will be significant differences in the Nintendo DS version of the game. You will use the portable touch screen feature to control the action in the Fighters Ring. The Nintendo Ds version will also include wireless multiplayer action, as well as minigames instruction. However, there will be the limitations of the other versions in that this version will represent a roster of only 20 wrestlers and will retain the season mode before the new WWE 24/7 mode.
‹
›
Home
View web version