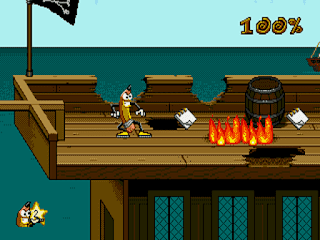 Genre: Action
Perspective: Side view
Visual: 2D scrolling
Gameplay: Platform, Puzzle elements
Published by: SEGA of America
Developed by: Sega Multimedia Studio
Released: 1995
Platform: SEGA CD / Mega-CD
An exclusive Wild Woody game released only for the Sega Mega-CD game console. With its world, the game is simultaneously similar to Spot Goes to Hollywood, since we have to travel to different worlds and the Comix Zone, since all the worlds in the game are drawn. The game tells us about one ordinary office pencil named Woody. He lay quietly in the office of his adventurer owner until he returned from another adventure with a new trophy. It turned out to be an unusual totem, which eventually exploded, and spirits in the form of heads flew out of it and flew away in all directions. They hid in various paintings. At the same time, leaving only one office from the world. But one of the wisest head remained from this totem. And now she needs a hero who will find and catch the rest of the totem in order to put them together. This is where he comes across an office pencil. He brings him to life and takes him on a journey through fictional painted worlds. This is where our game begins.
We, in the role of a pencil, have a difficult path ahead of us. Fortunately, we can use any privileges of the drawn world. We can draw auxiliary objects. True, first we will need to find sketches. Or, you can simply erase enemies or walls with chest lids using an eraser.
‹
›
Home
View web version