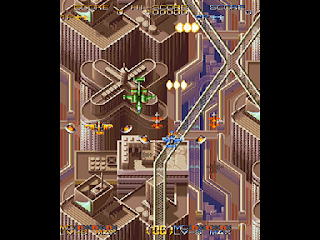 Genre: Action
Perspective: Top-down
Visual: 2D scrolling
Gameplay: Arcade, Shooter
Setting: Sci-fi / futuristic
Published by: Capcom Co.
Developed by: Capcom Co.
Released: 1992
Platform: Arcade Machine
A game with completely hurricane gameplay in which you have to fly a new generation aircraft armed with all sorts of heat-seeking missiles, laser cannons and all sorts of other things. The strong point of the game is its excellent visualization: the level design is excellent, special effects are also given an important place, everything is done beautifully and brightly, which is already breathtaking. The gameplay is also interesting in that there is no clear border between the levels, some events smoothly flow into others, which you might not even notice that you have just passed to a new level. As for the enemies, there are a lot of them, from small fighters to high-tech large bosses.
‹
›
Home
View web version