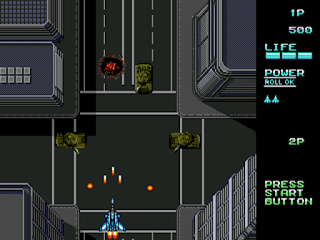 Genre: Action
Perspective: Top-down
Visual: 2D scrolling
Gameplay: Arcade, Shooter
Published by: Renovation Products
Developed by: Data East Corporation
Released: 1991
Platform: SEGA Genesis / Mega Drive
In 1999, a terrorist organization called DAGGER took over the city of New York. In it, they hacked into military defenses, created their own military organization, and took control of nuclear installations. Now they threaten the security of the entire world. A US Special Forces Air Unit was deployed at DAGGER headquarters in New York. Your goal, alone or together with a partner, is to defeat terrorists and prevent a nuclear war. You will have a choice of three fighters, each of which has its own unique properties. Weapons can be improved by collecting upgrades that drop from some enemies. Also, the safety margin of the fighter is limited, but it does not explode after the first shot.
‹
›
Home
View web version