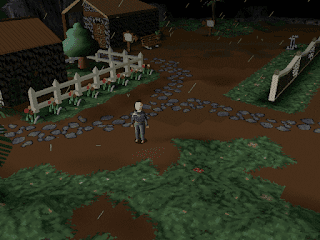 Genre: Action, Adventure
Perspective: Bird's-eye view
Published by: Activision
Developed by: Adeline Software International
Released: 1997
Platform: DOS
Continuation of a wonderful game Little Big Adventure.
So, Twinsen's world was saved by a young boy Twinsen from the sinister dictator Fanfrock. The dictator was defeated, healthy capitalism was established on the planet, the villain's fortress was destroyed, his girlfriend became pregnant, the graphics were transferred to full 3D. What's next?
First, the video sequence. Inside the buildings, the game looks the same as before - an isometric projection onto pre-rendered backgrounds, 3D character models quite colorfully live their lives. But outside, a full-fledged 3D with a movable camera awaits us (it freezes at the point you set and moves, alas, only discretely - sometimes to predetermined points, sometimes it's up to you: you can rearrange it, move it closer, or just drop it back on the machine) and full-fledged three-dimensional landscapes.
Secondly, the plot. After a little warm-up adventure, Twinsen is confronted with a funny surprise - the aliens arrive on the planet! Who then kidnap ALL WIZARDS! And they also CAPTURE POWER! And we have to disentangle it all, moving from island to island, and then into open space ...
Thirdly ... part of the arsenal has remained unchanged - a magic ball, mechanical penguins-bombs and Sindella's medallion will not be taken away from us, but there are a lot of new products - a laser pistol, a magic saber ... and a cute spitting tube - all of which we will pacify , to convince and tamp all enemies of a quiet, peaceful life.
Fourth, fifth, seventeenth ...
Beautiful music, breathtaking variety of landscapes, a rather pleasant mixture of acrobatic nightmares (a little simplified due to the relocation of the camera) and the selection of actors who played their roles honestly - all this provides an extremely pleasant immersion in a fairy tale for heart and soul. The tale of a little big adventure ...
‹
›
Home
View web version